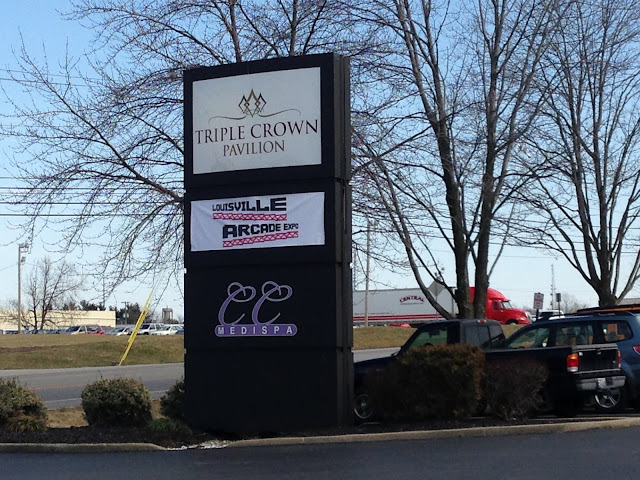 Two posts ago I wrote about Ground Kontrol Arcade in Portland, a real 80s-era arcade. Today I'm writing about the Louisville Arcade Expo, which is a gathering for people who love video games from the late 70's to the consoles of the 90s. I am not necessarily meaning to turn this into a classic video games blog, but let's just see where things go.

The Louisville Arcade Expo has been happening since at least 2011. Last year it was on my radar, but I didn't get it together to go, and I felt much regret after missing it. We recently set up a MAME cabinet at Bloominglabs, so I've been on a classic video games kick lately and this year was not going to miss it. I rounded up a couple other people to make the trip from Bloomington to Louisville to check it out. The day was a magical event that exceeded all expectations, with only a couple of negatives that we'll talk about later.

It was held in the Ramada Plaza, well outside of downtown Louisville in a sort of non-descript industrial zone. Of course, we were planning to spend the day in a retro 80s-90s bubble, so the setting didn't matter too much. There was a lot of floor space featuring 100s of pinball games and 100s of classic arcade games (I may be exaggerating a bit here. My point is, the space was huge.) There were also competitions with the action projected on the wall, an '80s Living Room', a vendor area, a food area for people wanting a $7 rum and coke or $3 hot dog, and finally my favorite spot, the classic computers and consoles room.

This room was laid out in chronological order, starting with the classic Atari 2600 (yes, there were games before then, but here we started with the 2600). That was my first home video game, one I spent many, many hours playing. I've since revisited the games in emulated form, both on PCs and in the form of a cheap 'Jaxx Pacific' joystick I have featuring some old games, but this was the first time in 25+ years that I picked up the cartridges and popped them in, which is a different feeling. I played Space Invaders, Choplifter, and Missile Command, opting to steer clear of the horrible, terrible 2600 port of Pac Man (although I saw quite a few people playing this over the course of the day. It was as horrible as I remembered!) One minor problem was that one of the joysticks was sticky, so I swapped it out for the other one, and then marveled that people would subject their old video games and arcade cabinets to a weekend of wear and tear (thank you, people who did).
Other games and computers present included the Atari 800, the TI-99, the ColecoVision, Nintendo's FamiCom, the really wonderful Vector graphics console the Vectrex, Super Nintendo, Sega Genesis, Dreamcast, 90's DOS boxen running DOOM and the like, and quite a few things I'd never heard of and was seeing for the first time, like the Nintendo 'Virtual Boy'.
Virtual Boy was from the days when 'Virtual Reality' was a big thing, and people would wear VR helmets and gloves and get real headaches in simulated environments. Virtual Boy features goggles on a tripod that cover the wearer's entire field of vision, with 2 screens showing slightly different images in two colors, red and black. I played Mario Tennis on it, and the 3D effects were pretty cool, but honestly it wasn't something I could imagine myself spending hours playing.

The aforementioned Vectrex was a totally different story. Some of my favorite classic games (Tempest and Asteroids for example) use vector graphics displays, as opposed to the raster-scan approach that other games (and TVs) use. With Vector graphics, rather than drawing pictures line-by-line, the lines in the picture are drawn with the beam. The resulting look is very bright and sharp, 'jaggy' free, and emulators totally fail to convey via software what this kind of hardware looks like. Vector displays fell by the wayside, so you can't really go out and buy a new one, but fortunately people keep the old arcade cabinets and the Vectrex consoles running, and I may have to get one from eBay sometime soon.
The games I had a chance to play at the Expo were Fortress of Narzoid and Vector Pilot. Vector Pilot was a vector graphics version of Time Pilot, actually written by Vectrex homebrew enthusiasts in the 2000s, and Fortress of Narzoid was an interesting game requiring the use of the walls to hit enemies with ricochet shots. The controls were really nice, and the gameplay was addictive. I think at the time they were poorly marketed and too expensive, so no matter how good they were, a kid would have a hard time selling getting one to his parents when the Atari 2600 was so much cheaper.
As far as the cabinets went, I played some old favorites including Tempest, Asteroids, Satan's Hollow, and Pole Position (both stand up and the sit-inside versions, where I got the high score for a bit). I played a couple games I either missed or didn't play much the first time around, like 'Domino Man(?)' and Mousetrap. I didn't play any pinball at all, in part because there were always lines, and also because I remembered I don't really like pinball. The arcade games were almost always occupied, but people were good about taking turns and sharing and so forth (Louisville/Southern politeness? The Classic Video Game set being good people? Whatever it was, I liked it). It was the same story (mostly) in the antique computer/console room, although I did have to tell a kid to move along when a line started growing behind him at the Virtual Boy.
The convention also featured tournaments, panels and speakers. I went to a presentation by a young filmmaker who had also made a 2600 cartridge, but I didn't stay for it all because I wanted to get back to playing. I didn't check out the tournaments, either. There was a somewhat small vendor section, with one guy selling old cartridges and video games, including some homebrew cartridges like 'Grizzly Man', based on the Werner Herzog documentary about a man who cares for, then is eaten by Grizzly Bears. I looked for a 'Bowser' (aka 'Browser') stuffed animal or toy for my daughter, but the toys were mostly Mario/Luigi/Yoshi. My friend Zach found a 'Slimer' stuffed toy for his daughter.
Fellow Bloominglabber (B-Labber? Blabber? We haven't worked out the nomenclature) Zach spoke to the organizer (who was running around dressed as Luigi) about the possibility of Bloominglabs having a table next year where people can make or modify old controllers. So watch for that next year.

A guy who has been on my radar somewhat was there, but his chair was empty. Sonny Rae Tempest had his Atari 2600 game poem 'Nothing is 0k' on display. Honestly this one required a bit of deciphering, and my eyes weren't really up to making out the binary codes on the screen. I am a fan of his 'stuck in traffic' Atari poem Calm, Mute, Moving, but as the controller is a simulated cigarette, it probably didn't lend itself well to sharing it with hundreds of people and their germs.

Food-wise, things were not so great. 'Wick's Pizza' is attached to the hotel, so we all thought, hey, great, let's eat there. However, two of the people I came with waited there 20 minutes to be served before bailing out to go to Dairy Queen. Later, I went at around 2pm, thinking I was being clever and wouldn't have to wait because of a lunch rush, but a horde of bikers showed up right before me. They were benevolent Harley-Davidson bikers, who have a median age of my age + 15, but still, it was annoying to have to wait a long time for a passable stromboli. Our other friend tried to go there and arrived just as a fight was breaking out, with two guys in ties (at the opposite end of the dress code spectrum from our benevolent bikers) pushing each other saying threatening things, and he was told by the manager that he couldn't serve him as he had to deal with the situation. He ended up making due with a hot dog, because by that time the Dairy Queen's grill wasn't working.

I had one of the great $7 Rum and Cokes later in the day, and while it was pretty strong, it was still $7, and of course I had to tip the server. I'm not an animal.

The crowd was all-ages, and not everybody was as nerdy as myself. People did tend to gravitate toward the games of their youth, which was not surprising, but I did see some kids playing the ancient games and having fun. It certainly appeared to be a huge success. I will be coming back to this one, and I recommend it to anybody in the area with an interest in pinball or arcade games. It was great fun.

This is a great article. I have never been to a video game expo but it would be so cool. I am a big gamer so I enjoy playing all sorts of video games. However, I would have to say my favorite are old classic arcade games. The best games are like Street Fight, Mario, Donkey Kong, and Pacman. I have been trying to find a ms pacman arcade machine for years but no luck. Maybe if I visit an expo I could find one.

Therefore, it is important to purchase bags made of high quality materials to ensure they will pass the test of time both in terms of condition and style. replica watches uk Nevertheless, you will not find a bag worth purchasing on the shelves of a cheap store. One can check out their showbag options on their website. fake omega Since 1990, Absolute Showbags have gained lot of praises as well as regular customers close by Australia. fake louis vuitton bags Not only for personal gifting but even various schools now get in touch with them to order showbags for fetes, other social events, etc. replica hermes Purses are important accessories to chic the personality, and if it is a designer bag then you are surely the hub of attraction. fendi replica Designer label, embossed patent leather and shiny gold accent aspect doesn't have to mean you cannot afford buying such purses.